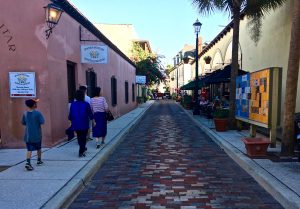 Aviles Street: America’s oldest street. Home to restaurants, art galleries and the St. Augustine Historical Society Research Library (corner of Aviles and Artillery), many of the buildings on this street date from the early to mid-18th century

Welcome to the Old City South neighborhood. In this section, we invite you to explore our neighborhood, its location, history, zoning and some places of interest.

The boundaries of Old City South 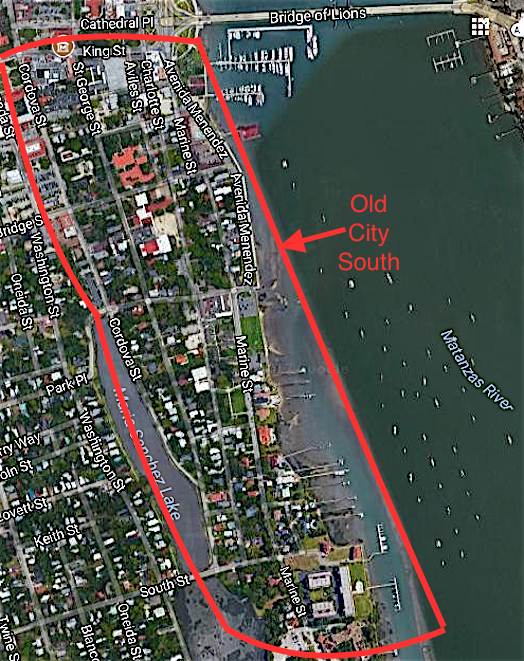 Old City South (outlined in red) lies to the southeast of the Plaza de la Constitucion and the Bridge of Lions.

If you stand on the corner of King and Cordova Streets, next to the Casa Monica Hotel, you are standing on the northwest corner of our neighborhood. The northern border of Old City South is King Street, and our neighborhood lies to the southeast. South of King Street, Old City South stretches between Cordova Street and Maria Sanchez Creek on the west and the Matanzas River on the east and south. Just to the north of Old City South and within easy walking distance of our neighborhood is the downtown area of St. Augustine, Flagler College, the Lightner Museum, the Plaza de la Constitución, the Cathedral Basilica of St. Augustine, and the Bridge of Lions. 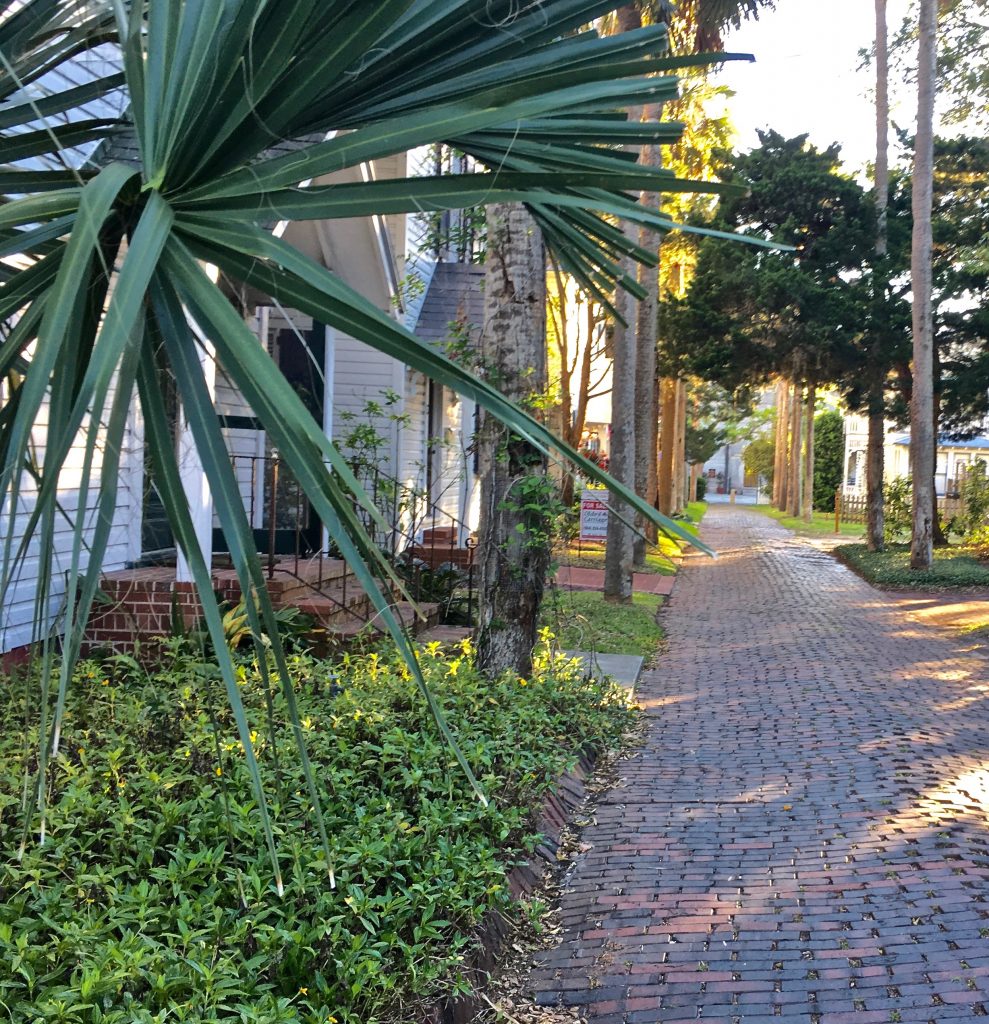 An Introduction to Old City South

The northern section of Old City South, between St. Francis and King Streets is Old Town. Here you will find shops, galleries, hotels, bed and breakfasts, restaurants, and older homes. Parts of this area have been continuously occupied since 1565, the year of our city’s founding. As a result, Old City South can rightly claim to be America’s oldest residential neighborhood. 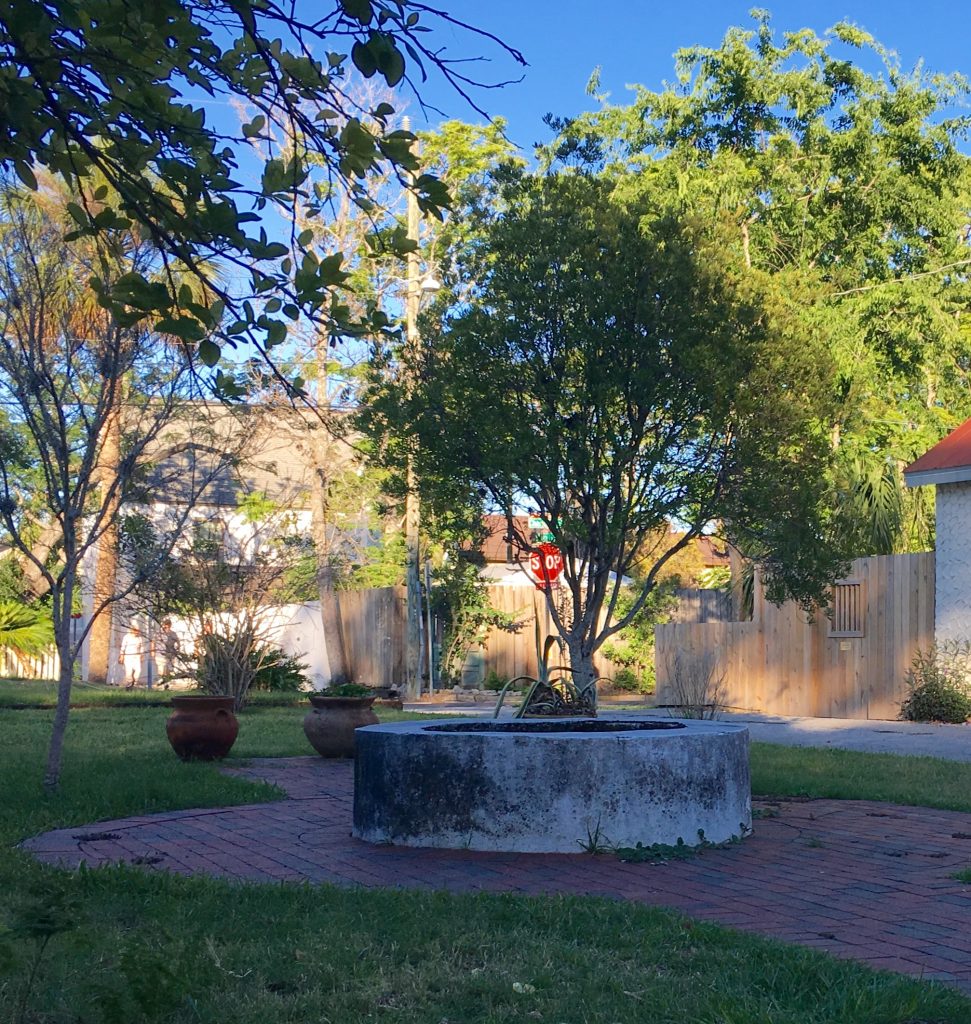 Cofradia Site Coquina Well on Aviles Street ca. 1614 – 1657. Furniture fragments from the 1600s and earthen pieces from a nearby house possibly destroyed by fire were discovered in this well when it was excavated in 1990.

Unfortunately, none of the buildings or homes in Old City South date from this earliest period in our city’s history, as the city was burned in 1702 by British militia from the colony of Carolina. After that fire only one wall in the town still stood, a coquina wall which now forms part of the Officers Club and National Guard Military Museum at the St. Francis Barracks on Marine Street. Even so, one can still see evidence of the early city in the small blocks and narrow streets that are found in this section of our neighborhood. Though no buildings survive from the period before 1702, if you carefully explore our neighborhood, you can find structures dating from the 17th century. One such structure is the Cofradia Site Coquina Well on Aviles Street, which was constructed in 1614. 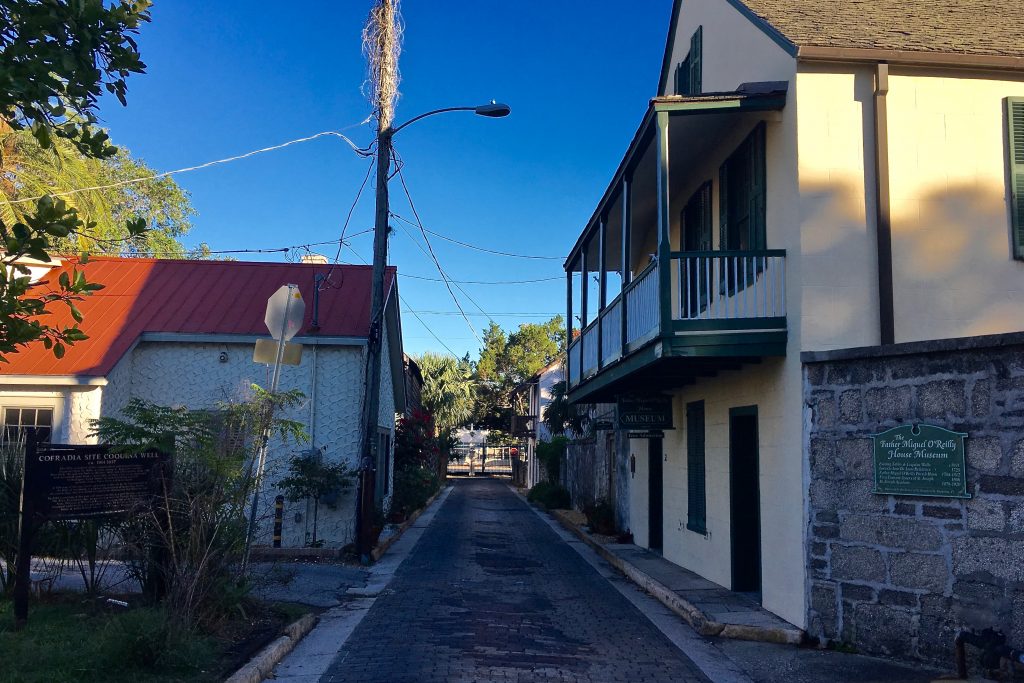 The Father Miguel O’Reilly House on Aviles Street. Built sometime before 1788, this home is a good example of the two story coquina homes typically built in St. Augustine during the second Spanish period. 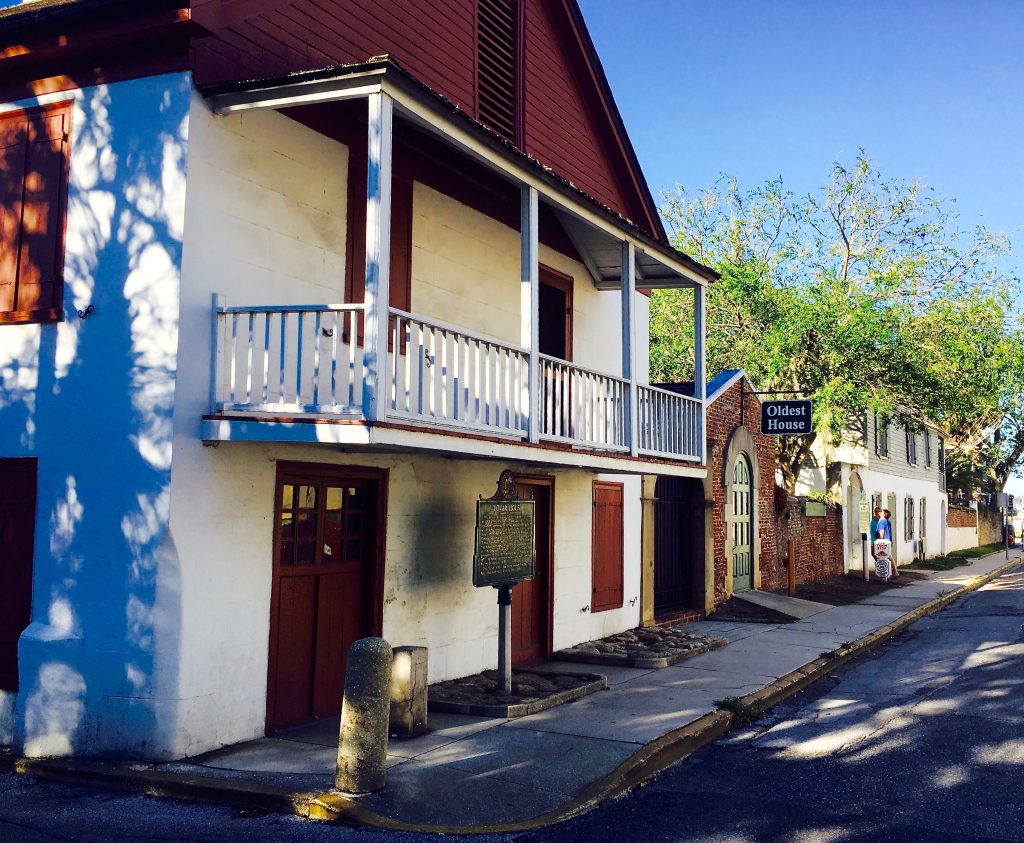 The Tovar House sits next to the Gonzalez-Alvarez House on St. Francis Street. The Tovar House is believed to be one of the earliest coquina buildings still standing. It was constructed sometime before the first Spanish Evacuation in the early 1760s.

As you wander the streets of our neighborhood, you will find many of the oldest buildings in St. Augustine. In fact, Old City South contains the highest number of colonial era homes and buildings in St. Augustine. Among these are the Father Miguel O’Reilly House on Aviles Street, the Sanchez House on Bridge Street, the Marin, Puello, Jones and Rovira houses on Marine Street, and the Gonzalez-Alvarez (Oldest) House, Tovar House and St. Francis Inn on St. Francis Street. Our neighborhood’s historic treasures are not just limited to colonial era buildings. In the block between Cordova and St. George Streets north of Bridge Street is the Collector Inn, formerly known as the Dow Museum of Historic Homes. The Collector Inn is comprised of a collection of eight historic homes built between 1790 and 1907, which were purchased and moved to this location by Kenneth Worcester Dow beginning in 1939. Seventy-six years before this, however, during the Civil War, St. Augustine was occupied by Union troops, and it was here, on the grounds of today’s Collector Inn, that on January 1, 1863 the Emancipation Proclamation was read aloud in St. Augustine on the very day that it took effect.

South of St. Francis Street, you leave the hustle and bustle of Old Town for the quieter, tree-lined residential streets that form the heart of the Old City South neighborhood. The homes here are typical of architectural styles from before the Civil War through the Florida Boom period. The main north-south streets are Cordova, St. George, Charlotte and Marine Streets. 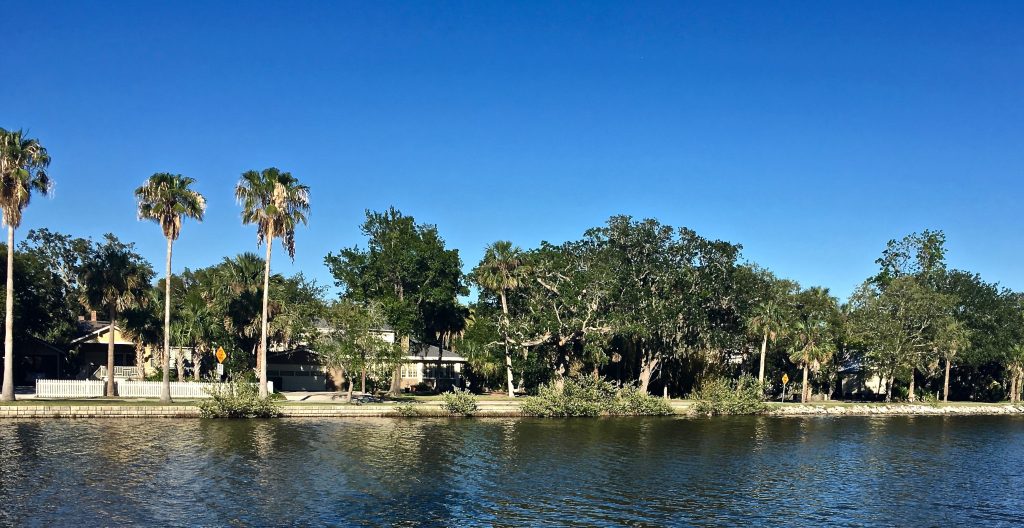 Looking from Lincolnville east across Lake Maria Sanchez to Cordova Street. 300 years ago, this was the site of the Rosario Line.

Today homes dating from the 19th and early 20th centuries face the eastern bank of Lake Maria Sanchez along Cordova Street. 300 years ago, however, the lake was a creek and where Cordova Street lies today was an earthen and palmetto log fortification called the Rosario Line, which marked the western limits of the old walled city of St. Augustine.

South of St. Francis Street, the easternmost street, Marine Street, is dominated for much of its length by the St. Francis Barracks, the headquarters of the Florida National Guard and the site of one of the nation’s oldest national cemeteries. 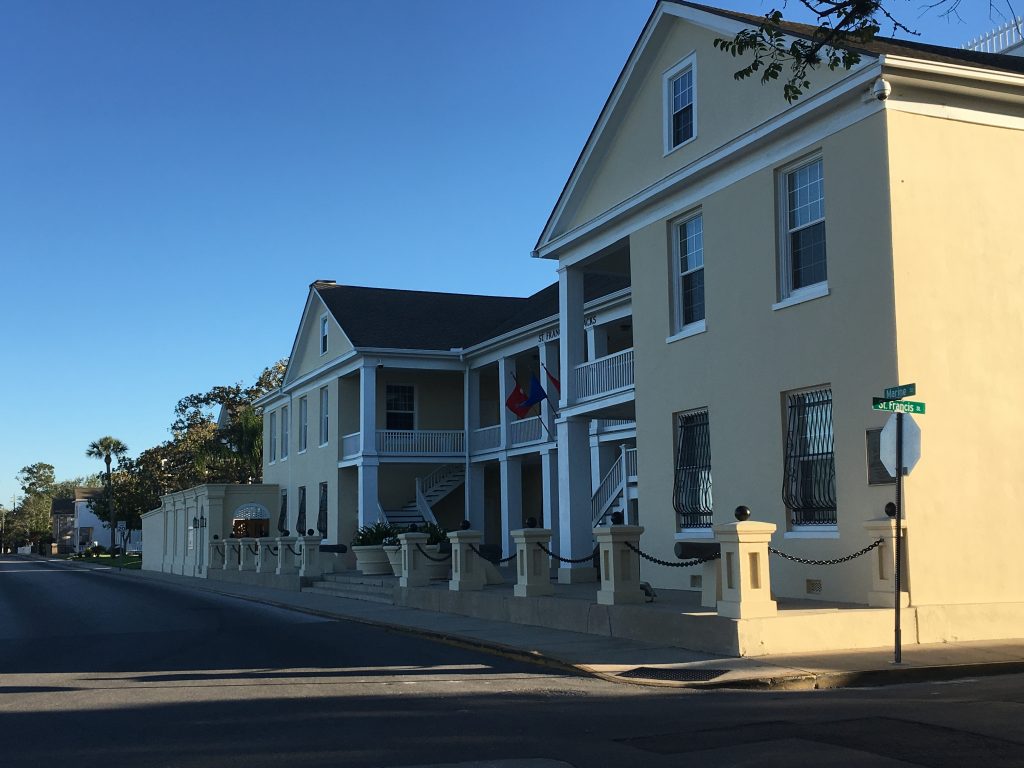 The front of the St. Francis Barracks on Marine Street, headquarters of the Florida National Guard

Operated as a military barracks since 1763, St. Francis Barracks was named for the Franciscan monastery which occupied this site before it was appropriated for a barracks by the British. 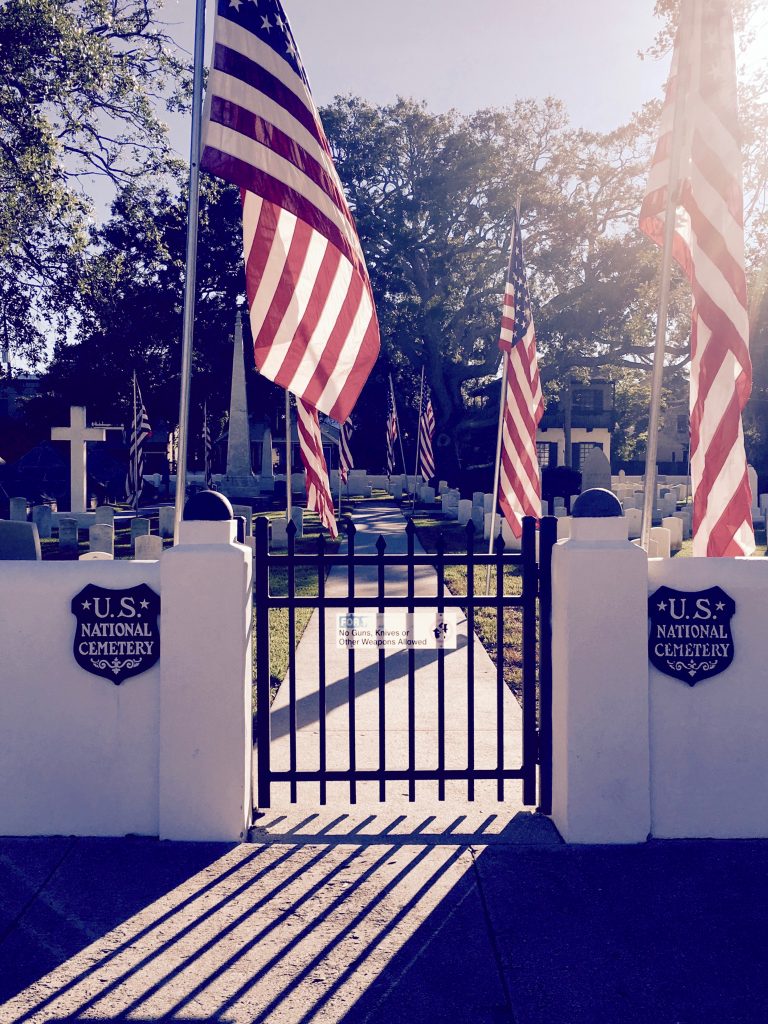 Just south of the St. Francis Barracks is the National Cemetery, the home of the three Dade Pyramids. The remains of over 1100 war dead from the Florida Wars (1835 – 1842) are entombed here and the Dade Pyramids are thought to be the oldest memorial in any national cemetery.

This is only a taste of the many treasures that one can find in our neighborhood. And there are so many more: A building that now houses condominiums, but which was built in the 19th century as a military hospital; a house that was the “Florida getaway” for the first chairman of RCA, Owen D. Young, and at which Marjorie Rawlings, Pulitzer Prize recipient and author of The Yearling, was a regular guest on Sunday afternoons for bridge; the infamous “Murder House” featured in the book Bloody Sunset in St. Augustine, a true story about a gruesome 1974 murder at a house on Marine Street.

Almost every home in our neighborhood has an interesting story. And as you meet us sitting on our porches on a warm, Florida afternoon or walking our dogs about the streets of our wonderful old city, many of us are happy to tell you those stories. The history of our neighborhood and the warmth of our neighbors are part of who we are and what we love. For many of us, it’s why we chose to live here. But wouldn’t you expect that of good folks who’ve chosen to live in a neighborhood that’s been around for over 450 years?

Bring Your Own Mug